Lars and Whitney will work with our Program Director, Holly Larson (who is a former SPD herself!) This team of three will lead the summer staff and oversee the implementation of the summer program.

Lars and Whitney are both seasoned staff members, and they will use their experience, leadership and creativity to provide a positive environment for both summer staff and campers. Lars and Whitney spend a good chunk of time on planning and coordinating each week’s schedule, but the majority of their responsibilities come down to relationships. The Summer Program Directors’ are encouragers, cheerleaders, counselors to the counselors, homesickness experts and wild morale boosters. A day never looks the same for these two University of Northwestern Seniors. God has prepared them well for this summer, and they will carry out his work!

Lars and Whitney have each written a little bit about themselves and their excitement for this upcoming summer. 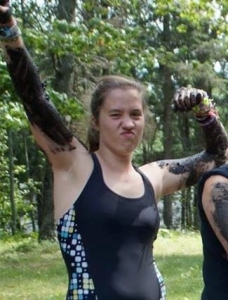 Whitney Jenelle Sorensen is going into her fourth summer on staff at Covenant Pines, and her first summer as the Female Summer Program Director. She has served as a counselor for the last two summers and was in the kitchen her first summer on staff. Whitney grew up coming to CPBC as a camper and was involved in SWEAT and LIT. Camp is where she learned how to passionately serve and love God no matter where she is or what she’s doing. When she is not spending her summers running around with paint proudly on her face, she is studying Health Sciences at the University of Northwestern, St. Paul. One day she hopes to be a physical therapist, but until then she will have to continue sporting neon shorts, playing volleyball with her family, and choreographing dances with her best friend.

Lars Bradley Markson is going into his fourth summer on staff at CPBC, and second summer as the Male Summer Program Director. Lars has grown up going to camp every summer, and attributes his passion for the Lord and kids to all of his experiences in chapel, speakers, and devos from CPBC. When not at camp Lars is studying Youth and Family Studies at the University of Northwestern St. Paul, throwing a frisbee, eating Taco Bell or playing board games with his pals. And last, his favorite movie quote is: “Heroes get remembered, but legends never die. Follow your heart kid.”