On April Fools day we posted a spoof article about hiring the famous actor, Tom Hanks, as our new Executive Director. Below is the article. Enjoy the humor! 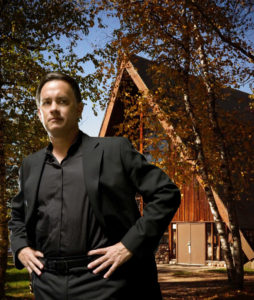 And now, we are pleased to introduce the next Executive Director of Covenant Pines Ministries. Mr. Tom Hanks. You may not know this, but Tom grew up in the Evangelical Covenant Church. He attended First Covenant Church in Oakland, CA as a youth. He also worked on summer staff at Mission Springs Christian Camp & Conference Center in Scotts Valley, CA. His experience on staff there was life changing. After following God’s call into show business for many years, Tom says he is feeling God calling him to “give back to the ministry that changed [his] life.”

The full time staff of Covenant Pines Bible Camp and Adventurous Christians met with Tom last Thursday. During the meeting the staff expressed their excitement to have someone on board with so much diverse leadership experience. Tom has not only worked as film director and producer on dozens of films and documentaries, he also has a wealth of fundraising experience at over twenty charitable organizations including the Elevate Hope Foundation, and the Madisons Foundation. Hanks has demonstrated his fundraising abilities and love for children through organizations like these for more than half his life.

If all that experience isn’t impressive enough, Mr. Hanks has also overcome quite a bit in his own life. At our staff meeting, Tom shared story after story. Tom was born with strong legs, but a crooked spine. He had to wear tough leg braces through his adolescence. Then, he  spent a few years working at a toy company when he was only 12 years old. After being a private in the Vietnam War and a captain in World War II, he decided to become a commercial sea captain. Unfortunately, tragedy struck when his ship was captured by pirates and he was stranded on an island where his only friend was a volleyball. He eventually found his way off the island and tried to find a quieter life working for the FBI, tracking down check counterfeiters. After that did not turn out to be the quiet life he hoped for, he felt that he was simply made for adventure. And so he joined NASA and attempted to go to the moon. It was after this failed mission when he felt God’s call into camping ministry.

Tom’s first move as Executive Director is to make the camp coffee shop, Covenant Grinds, into a national franchise. Tom believes that taking Covenant Grinds to the corporate level could increase the overall CPM profits tenfold. The first Covenant Grinds location will be 4648 E Lake St, Minneapolis, MN. We hope our friends at Minnehaha Academy and the Northwest Conference office will be there for the grand opening in June.

We asked Tom to write a little something to introduce himself to all of the fans of Covenant Pines Ministries. Here’s what he had to say:

“I’m very excited and honored to be in this position. You know, life is like a box of chocolates. You never know what you’re gonna get. If you would have told me a year ago that I would be the Executive Director of Covenant Pines Ministries, I would have said you were crazy. I wouldn’t have believed it. Seeing is believing, but sometimes the most real things in the world are the things we can’t see. God had this train ready and it was headed for McGregor, MN. The Lord told me to climb aboard. One thing about trains; it doesn’t matter where they’re going. What matters is deciding to get on. But there’s something about Covenant Pines. I knew it the very first time I stepped out my car in the parking lot. It was like coming home…only to no home I’d ever known. It was like…magic. I may not be a smart man, but I know what love is. And I love Covenant Pines. Occasionally you get to be a part of justice being done. That really is quite a thrill when that happens. Even I know that ain’t somethin’ you can just find around the corner. People tell me that this job is going to be hard. To them I say it’s supposed to be hard. If it wasn’t hard everyone would do it. The hard is what makes it great. I know what I have to do. When it gets hard I know I gotta keep breathing. I have to get out of bed every morning… breathe in and out all day long. Then, after a while I won’t have to remind myself to get out of bed every morning and breathe in and out… and, then after a while, I won’t have to think about how I had it great and perfect for a while. Because tomorrow the sun will rise. Who knows what the tide could bring? That’s all I have to say about that.”